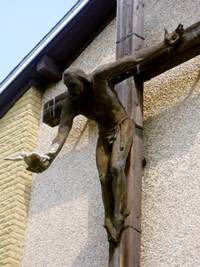 Our parish of St. Paul was established by order of his Eminence, Archbishop John Cardinal Krol, on June 4th, 1963. Father Francis Gaughan was assigned as first pastor. In selecting a patron for the new parish—drawn from areas formerly in the parishes of St. Patrick, St. Titus and Epiphany of Our Lord, his Excellency chose St. Paul, Apostle of the Gentiles and co-patron of the Cathedral of the Archdiocese. At its founding, our parish included nearly 800 families, and close to 3,000 souls.

The first Mass of our parish was celebrated on Sunday, June 16th, 1963. With the assistance of the Augustinian Fathers from Villanova University, four Masses were offered on that day in the auditorium of Bishop Kenrick High School (presently named Kennedy-Kenrick High School).

With generous, continued effort of the men of the parish our rectory was made habitable, and daily Mass in the rectory chapel was begun.

Planning for our parish buildings commenced in August of 1963 when the architectural firm of Peter and Paul Getz was engaged. Approval of construction plans were secured, and in January of 1964 contracts were awarded to the Lloyd F. Kershner organization of Norristown for erection of a combined church-and-school building. The contract for the convent was later awarded to the Davis Construction Company.

Completion of our church followed shortly, and at seven o’clock on the morning of Sunday, October 3rd, 1964, the first Mass in the new church was celebrated.

The Cross which is displayed on the back of the church facing the corner of New Hope Street and East Johnson Highway was created and sculpted by Wendy Berg, who, at the time, was a student in her junior year, at Moore College of Art, in Philadelphia, Pa. Assistant Professor Jerry Crimmins said “she accepted the commission and offered to do the complete job, including the casting – a remarkable undertaking for one person… but a unique learning experience.”

The Bishops of the United States are calling for a three-year grassroots revival of devotion and belief in the Real Presence of Jesus in the Eucharist. They believe that God wants to see a movement of Catholics across the United States, healed, converted, formed, and unified by an encounter with Jesus in the Eucharist—and sent out in mission “for the life of the world.”

These three years will culminate in the first National Eucharistic Congress in the United States in almost fifty years. Almost a hundred thousand Catholics will join together in Indianapolis for a once-in-a-lifetime pilgrimage toward the “source and summit” of our Catholic faith.